Skip to content
I got my new studio keys about three weeks ago and have been completely moved in to my new space for about a week. There have been many hurdles to overcome and the list is still long. The first thing I did when I had the keys in hand was to go in and pull up the gross, stained, stinky industrial carpet. What was under there? Perhaps I would find buried treasure in the form of a hardwood floor? What I found was... another layer of even worse carpet, that was glued onto ancient linoleum tile, which was glued onto a wood floor of some kind. As I contemplated the thousands of dollars this was about to cost, Sara Paloma's husband, Tom, immediately started doing some research and came up with the idea of using plywood sheets as a floor. He even volunteered his Sunday to help me and my husband install it, right over the carpet. Kind of genius. 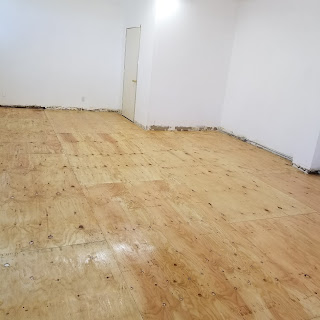 I'm not going to get into the other pending issues such as the electrical (needs to be upgraded) or the ugly fluorescents that make me feel mildly suicidal (just mildly, not enough to start planning anything), the floor to ceiling windows that leave my workspace completely exposed (anyone ever played around with that window glaze in a can?) and my general sense of dislocation and discombobulation. Frankly, buying a house and moving to a new city has been nothing compared to moving my studio.
Then there was the actual moving part. The truck I ordered was not big enough, which became apparent after the movers were about halfway through filling it up. Then, I locked my keys in the studio when we were about to leave, requiring an emergency rescue from my landlords who, thank god, answered their phone on a Sunday morning. 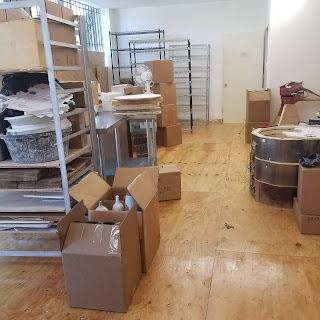 After that it was multiple trips with a friend's borrowed truck to move more of my studio stuff. One day I loaded the back with my Ikea lockers and a table and made my way back to Vallejo. Once I started unloading the truck, I realized something horrifying: one of the lockers was missing. No, I didn't leave it behind, it blew out of the back of the truck. This despite the fact I had plenty of tie-downs and I was even silently congratulating myself on really getting the hang of tying stuff down as I secured the back of the truck before leaving Oakland. I immediately completely freaked out. Like, bad. I'm going to cut to the end of the story: it didn't kill or harm anyone, and it didn't cause an accident. But it could have.
This event forced me to reckon with something else that has been shadowing me over the past weeks: my toxic impatience and general lack of care when I'm trying to accomplish tasks. My body is currently covered in bruises because of running into things and bashing myself during both moves. I had a nasty blood blister on one of my fingers from hitting it with a hammer. I've tumbled off of ladders and down stairs trying to do too much. Even before this losing-a-locker incident I was telling myself to be more careful, I was going to hurt myself if I wasn't. Instead, I almost hurt somebody else, which is far worse.
After I recovered from that whole thing, I have been doing the work it takes for to me to accept that things are kind of fucked right now, and that's okay. In fact, it's nothing. All of it will taken care of in a timetable not of my preference, and I will somehow survive. No more rushing, no more pushing harder than necessary. 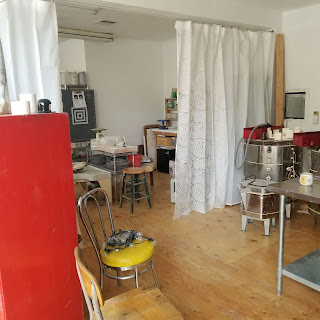